Jesus knew that his mission was now finished, and to fulfill Scripture he said, “I am thirsty.” A jar of sour wine was sitting there, so they soaked a sponge in it, put it on a hyssop branch, and held it up to his lips. When Jesus had tasted it, he said, “It is finished!” Then he bowed his head and released his spirit. (John 19:28-30 NLT)

Then the seventh angel poured out his bowl into the air. And a mighty shout came from the throne in the Temple, saying “It is finished!” Then the thunder crashed and rolled, and lightening flashed. And a great earthquake struck-the worst since people were placed on the earth. (Revelation 16:17,18 NLT)

And he also said, “It is finished!” I am the Alpha and the Omega-the Beginning and the End. To all who are thirsty I will give freely from the springs of the water of life. (Revelation 21:6 NLT)

In the post on March 25, 2015, I wrote on the topic “It is finished!” with my text taken from John 19:28-30. There are three places in Scripture that God the Father and Jesus the Son spoke these words. We will be exploring two other Scriptures, in which God said “It is finished!” Depending on which translation is used, you may find the words “It is done!”, they all have the same meaning. God is saying to us “It is completed!”

When Jesus had completed his missions that God had given him including the most difficult one-death on the cross, he said “It is finished!”(John 19:30). Jesus paid a great price on our behalf to free us from sin. When Jesus died on the cross a great exchange took place, he took our sins upon himself and exchanged it with eternal life in him. Romans 8:1-3 ‘So now there is no condemnation for those who belong to Christ Jesus. And because you belong to him, the power of the life-giving Spirit has freed you from the power of sin that leads to death. The law of Moses was unable to save us because of the weakness of our sinful nature. So, God did what the law could not do. He sent his own Son in a body like the bodies we sinners have. In that body, God declared as end to sin’s control over us by giving his Son as a sacrifice for our sins’ (NLT). I pray that we never lose focus on the price Jesus paid for us. We should live in that newness of life that he has offered us and not live a condemned life.

The first “It is finished” has already taken place at the cross, the next two are future events that are about to take place. Most people avoid reading or studying Revelation because of its contents but, chapter 1:3 tells us that there is a blessing for those who read and hear the words of the prophecy written in the book. Chapter 16, tells of the seven vials of God’s judgment upon the earth during the tribulation period. Verse 17 tells of the final vial being poured out into the air. God’s final judgment was poured into the air because Satan is the prince of the air, then God said “It is finished!” We should always find time to share the good news about Jesus to those who do not know him, so they can avoid the wrath of God that is coming. If we follow the instructions in chapter 1:3, we would have noticed that the signs of the end times is at hand.

This is not the time to get scared and worried. If we read the book of Revelation as instructed by God, then we would be prepared and try our best to witness to our unsaved families and friends. Everything that is mentioned in this book is going to take place, some already have taken place. The final vial that is poured into the air will cause a great earthquake that man has never experienced before. If we look back in history the worst earthquake recorded was in Shensi, China on January 23, 1556, which was a magnitude of about 8 and killed about 830,000 people.

That earthquake will be nothing compared to the one that will be poured out of the vial. The Bible tells us that the whole earth will feel the effect. Every island will disappear, all the mountains will be leveled, and there will be a terrible hailstorm. The hailstones will not be like what we are used to, the Bible states that they will weigh as much as seventy-five pounds. These hailstones will be falling on people killing them. My question to each of us as believers, including myself is, “Are we doing our best witnessing to draw unbelievers into the Kingdom of God?” God is going to hold us accountable if we fail to do what he has commissioned us to do in Matthew 28:19-20.

The final “It is finished!” spoken by God is in chapter 21:6. This is when God sends down the new Jerusalem upon the new earth in-order that men may dwell with God and God with them. This will only be for believers, no unsaved person will be there. “To all who are thirsty I will give freely from the springs of the water of life.” God is sending out an offer for those who are thirsty for him and know they have a spiritual need. The water in this verse suggest ‘need’, so the offer is to those who need Jesus in their lives.

12 Jesus spoke to the people once more and said, “I am the light of the world. If you follow me, you won’t have to walk in darkness, because you will have the light that leads to life.” John 8:12 (NLT)

On the first night of Tabernacles and apparently on each night of the feast except on Sabbath, the worshipers awaited the signal of the special lighting of the festive golden lamps of Tabernacles in the court of women. The lamps were intended to remind worshipers of God’s leading the people of Israel through the wilderness at night by a pillar of fire. The lighting of lamps also signaled Israel’s re-commitment to the God of light.

During Jesus’ three years of ministry on this earth, He was involved in many confrontations with the Pharisees and Sadducees because He went against many of their traditional rules and belief. They saw Him as a trouble maker and a child of the Devil. They were focusing on the past with what the lighting of the lamps symbolized, while He was trying to let them understand that He was the God of Light and the Light of the world.

The point here is to not be like the Pharisees, living in darkness when The Light is present. The Lord wants each of us as Christian to be beaming with His Light. When we have The Light within us, He will shine in our hearts and the world will be able to see the Light within us. Our Light should be shining in such a way that when we are around darkness (sinners), that darkness should be subjected to the Light within us. We should never forget or lose track of who we are and whose we are. We are the light of the world because we have Jesus living within us and we are children of The Light.

In a few days we will be celebrating Resurrection Sunday. This is to commemorate the risen Savior, Jesus Christ our Lord. Over two thousand years ago the Divine One who was without sin, entered this sinful world to die on our behalf. He became flesh to make the great exchange that none of us was qualified to make. That great exchange was to die a horrible death on Calvary’s cross in order that we may have eternal life. 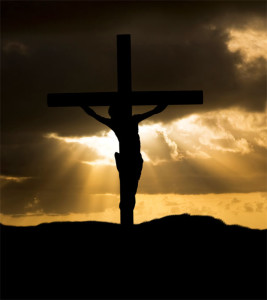 For hundreds of years before Jesus’ death, people would have to sacrifice animals in order to obtain forgiveness.   Although animal’s blood was used to cleanse a person or nation from their sins, this was only a temporary solution to a major problem. God knew that the only solution to solve this major problem, which is sin, was to send His only beloved Son who was without sin to die for humanity.

The Bible tells us that God could not find anyone on earth who was worthy to accomplish this great exchange. Jesus was the only individual who was and still is worthy to accomplish that mission. He was the only one qualified to die on our behalf. He was holy, sinless, and divine. His blood was not a temporary fixed like the blood of the animals. His blood that was shed once for all of us was a permanent solution for sin.

I personally thank God for sending His only Son into this world to die in my place. He paid a price that I could not pay and I am forever grateful. I will never be able to comprehend the anguish, pain, and torture He endured during His final hours before His death. But I am extremely thankful that He was thinking about me while on that cross. Jesus, I thank you for shedding your precious blood on Calvary over two thousand years ago in order that I can have eternal life. Thank you!